Well, it might be the other way around. Recently I picked up a really thin/small USB 4 port hub, which would get in the way (the way it was wired). But I found a use for him. The PC side of Amiga Yuri needed USB ports and other interface options.

So we begin with the left side front panel, which is two toggle switches (with LED’s :)), one momentary switch and a USB hub. The first toggle is a red LED, which is tied to the PSU for the system. When the system is powered down, the red LED lights up. The second toggle is for the Amiga’s 030 Accelerator, which can now be disabled (off) or active (on), the blue LED in this toggle is for the PC side’s HD light. The small momentary switch is to reset the PC Card, as this doesn’t have a power off/on so it would be handy to reboot it without having shutdown both sides. The USB is wired into the PC side, to allow me to mount CD-ROM, flash drives etc for the Goldfinger card. 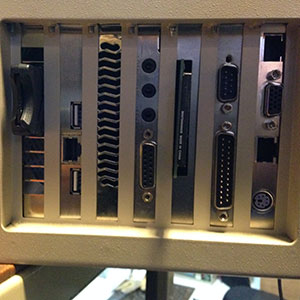 In the rear of the machine, I mounted all the ports that would be needed (but not all, there is not enough backplane for it :)).  From left to right: 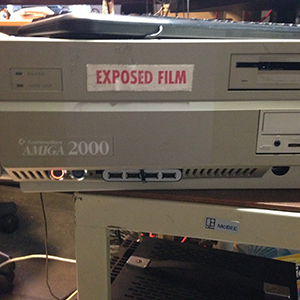 I left the machine running doing some speed tests to generate heat and everything worked out great. I was monitoring the BIOS for the PC side, thermal sensors didn’t rise as much as I expected. I put a thermal sensor on the Amiga MB and Accelerator and it’s temperatures only went a few degrees higher than normal readings. Amazing!

The case needed some cutting and with a Dremel, which turned out pretty clean. I’ve always wanted to use that space for something, it always seems like a waste of front panel. Just have front panel power is great, as when I was done I put it in my rack, along with a cheap VGA KVM switcher. So both machines use the same monitor 🙂