Hardware Changes and Adjustments (Part 1 of 3)

I had two Primary machines in Artschool, one was Yuri and the other was a Pentium 133 in the school lab. Years later, after working at the same school and passing the baton on to another — someone showed up to a house party with my Old computer in tow. The machine had been in storage and I had a disk backup of the machine. The IDE drive was cooked and there was some damage to the machine’s PSU. It was a gift I wanted to get going.

In order to get the rest of the changes completed, I needed to pull out the motherboard from the case.

I found a Goldfinger card on Ebay, which if you want to know more about them: Here and Here. The card is a PEAK650VLB, which is basically everything you need for a computer (minus a soundcard) on one ISA card. It’s like the bridgeboard for the Amiga, but a million times better. It has a 1ghrz Pentium 4, with 64 megs of ram, EIDE controllers, USB and two NIC’s (100mb). It’s a 16bit ISA Card, with a PCI edge near the front of the card. So it can be placed in either BUS system type.

The Amiga has ISA slots — 2 8bit and 2 16bit, which are dumb slots. And the PEAK650VLB is a card that takes over the ISA BUS, so I could add a few ISA cards into the mix. Last time I checked, the only 8bit ISA cards I had were a modem and PS2 port. Everything else (including my P133) was 16bit.

The Amiga 2000’s 8bit ISA slots can be upgraded to 16bit, if you solder on the extra connector. The PEAK650VLB is a monster full sized card (the heat sinks add to the girth), but because of the PCI connector it will not fit in the stock 16bit card slots.. only the outer slots (8bit) have the space to take the card. So it looks like some soldering is needed. 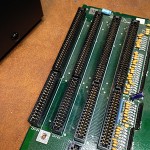 I did not know what I was thinking when I did that. It was such a brutal exercise initially. A solder sucker and iron took forever to get the first slot, which I will never get that time back again. Even after the solder comes off, trying to find the pins that had a minuscule amount of solder on them (preventing the slot from coming out) was impossible. Solder wick was faster on the second attempt, but still the connectors were impossible to pull out from the sheer amount of pins.

If you ever have to pull out a lot of stuff from a board, something like a rework station is needed. Sparkfun has one: 303D. There are moments in life where you think: Where was this 10 years ago? The third slot and the remaining two came out in a fraction of the time. I wish I had a 303D from the beginning. Awesome! Chopped off the 16bit part of the slot and solder to the Amiga.

So with the two slot’s upgraded, we get the next round of upgrades: 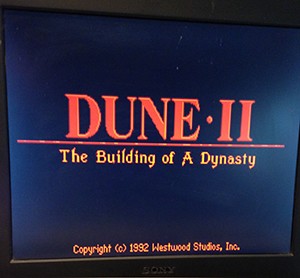 DOS 6.22, was a pain to get working with a more modern system. PNP and BIOS configs to get the sound card to work in DOS was something I pleasantly forgot.. but after a little brain massaging it worked. I installed DOOM3D and DUNE2, both of which I still have the original install disks. I copied over my original school/work backups from an ISO I made years ago. FRACTINT still looks great 🙂

I still need to make a backplane for the USB and Serial Ports for the PC side.

The last of the upgrades is SCSI2SD. This device basically is a hard disk replacement for computers with SCSI-2 interfaces. Insert an SD card, connect the device to a USB computer and configure how many SCSI devices and their sizes. Connect the device to the computer’s SCSI chain, boot and partition. It was pretty easy.

I did some speed tests before and after. I was a little sad with the results:

Maybe a different card choice or configuration might improve the stats. But the real amazing thing about this is that you can take the SD card out, back it up as an image and put it back. Multiple cards, multiple setups. I’m going to try and workout why the transfer loss, but at the moment I am happy with what I couldn’t do that easily before the change.