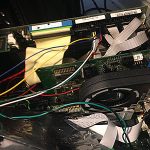 Yuri’s Goldfinger card was having some really strange issues — the PAS AUDIO 16 ISA card that was handling audio for the PC side of the computer was also throwing up in certain DOS configurations. The PC on a card PEAK650VLB2 ended up having BIOS corruption after finding a surface mounted resistor had popped off the card. I gave the card a hard look to see where the resistor was from, but it was next to impossible (the card has hundreds of them). If I had a card to compare against maybe, but its easier to pick up a new one. I managed to locate a replacement far far away for super cheap, which was a surprise when it actually powered up.

The card itself is a newer revision, PEAK650D4 type. The heatsink for the chipset required some ‘Mazzolla’ to let the processor heatsink slide into its spot. Whoever manufactured the card put the chipset heatsink on the wrong way. Oh well, I got it in (the processor) — with a little roughhousing.

I found a local source for a Soundblaster  AWE64 ISA card. All my starting computers that were PC’s had a variety of soundcards, but never a real Soundblaster. I have a collection of the best soundcards of that era (PAS16, GavisUltraSoundPro, TurtleBeachOriginal) as I did audio work at that time. Soundblaster, though is the best card for video game support — which is why this machine is set up. Other than some funny hardware warnings from Creatives’ plug and Play loader — the card works perfectly. Doom2, Dune2 and CNC all love the config now. The PAS16 would get one or crash another.

Getting the right memory configs in DOS6.22 is such a pain. I conveniently forget the massive pain it was in that era to actually get different games to work… let alone mixing in mouse and a LAN stack for multiplayer action. Memories of NE2000 and IPX smells like burning toast.