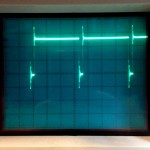 The A3000 was randomly deciding to output a proper signal to VGA. I know the monitor I was using (or LCD) was capable of displaying in the right frequency range — but only 1 out 5 power-ups would yield an active VGA display.

It was easy to tell when a good powerup would occur, as the VGA display would have some very dark gray vertical lines in the black screen.

Putting a scope on the VGA port showed signals on the RGB and H/V sync pins. Each signal looked okay from a casual inspection (comparing a good powerup versus bad). I checked all the pins around the board to see if there was anything missing on the way into the VGA… but if the VGA signals looked ok either way (on or off) then it must be a very slight signal variance.

The variable resistor on Amber was very touchy. I had a spare that would work, but I re-soldered the old part just to be sure.. it looked like there had been some work previously done on it. Using a metal screwdriver, I noticed the signals jumping around on the V/H pins. Removing the screwdriver would change the signal as well. I had a plastic screwdriver for altering TBC signals — TBC’s did the same thing with metal tools.

Without worrying about over turning the resistor, I swung it pretty far. I then noticed it was loose. After screwing it down for a while, I felt a bump and then the signal seemed to tune easier. I found the sweet spot, rebooted — VGA stable. I waited 30 minutes with the machine off tried again, still good. Off for two days, powered it up — still working fine. Nailed it 🙂