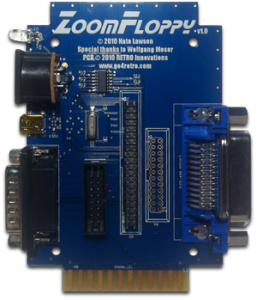 Zoom Floppy is a USB to Anything Commodore adapter. I can remember having a X1541, a 386 some a really old ISA LPT port adapter and hours of fiddling, copying and pain with Star Commander. After the setup got hooked up, I ended up slapping an NE2000 and a DOS based TCPIP Stack to transfer files off the disks. The Hacked up 1451 cable always had its issues too.

Move ahead to 2010+ and you have a Zoom Floppy. It was 5 minutes of setup and disk transfers were happening. It’s a great piece of equipment. One of the great other benefits is for the rest of us that have IEEE Devices. I have a SFD1001, CBM8050 and an MSD SD-2. It was pretty impressive to hookup these drives just as easily as an IEC 1541.

Backing up these IEEE devices is awesome, but accessing them without a BUS card on a PC is amazing.

I noticed some weirdness with the dual drive units, I could read off of Drive 0 but not off of 1. I am sure I just need to either update my software or I’m doing something wrong. But flipping disks between drives is not an issue.