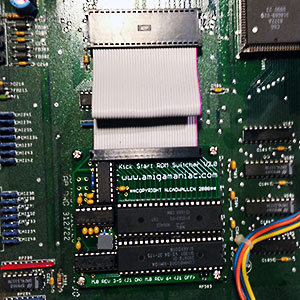 Yuri, originally was a KS 1.3 machine. When she got upgraded, I had a spare set of OS 2.04  roms and used those. But nothing says backward compatibility like installing a rom switcher. KS 1.3 is what the majority of games run under, so being able to switch between roms is a good thing.

The guy who makes this, no longer exists on the net (www.amigamaniac.com). I had to go to a web caching site to find a link that would get some installation info. I just had the device and no instructions. It’s pretty obvious what to do, but in the end it wasn’t that straight forward.

Under the roms in the socket is printed ROM 1 and ROM 2. All the chips on the board face one direction. The sockets didn’t have an obvious notch. So I followed the crowd and placed the roms how the rest were, which was wrong. After flipping them around, and looking for pin 1’s around the front and back — I noticed the notch. My coke bottle glasses should have seen it — but it was really small.

So under most circumstances, ROM 1 sounds like the primary/default and ROM 2 is the switchable one. Well that’s another mistake. Thank-you chip pullers 🙂

So after a few careful presses on the chips and adapter, a power cycle later and default KS 2.04 started. Holding down the Amiga three finger salute (ctrl-amiga-amiga) for little more than 3 seconds and KS 1.3 was revealed. Awesome! I dug out my floppies for Shadow of the Beast (originals in that  cool box :)).  While I had her opened, I tried the MegAChip2000 again, no luck (sucker for punishment. hehehe)