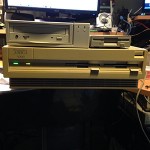 I upgraded the A3000D with as much stuff I had in storage and few things off of Amibay. After the RTC fixes, HD LED, misc capacitors and replacement floppy I started adding:

The mainboard initially had standard original custom chips (Ramsey 4, Super DMAC 2, Super Buster 7), which got upgraded to Ramsey 7, Super Buster 11. The WDC SCSI chip on the board was a type 04, which it’s now a type 08. The fast ram (8MB) was a mixed bag of chips and speeds, but they were all static column type which gave the 10% boost. A newish SCSI drive, 8.5GB which replaced a 200MB drive I found in it.

After installing the base OS, and the networking adapters — problems started to come out. Random checksum errors, enough to corrupt the drive a few times. After a few Disk Salv 4 sessions, I kept checking all the parts. I removed all the cards but the NIC and still got the errors. I had already upgraded the SCSI chip, which should have stabilized the SCSI chain. I checked the diode at D800, its direction and the voltage inside, on the port and through the cable. I double checked the drive to supply power and termination already and everything was terminated correctly.

Removing the BigRam+ for the remaining tests yielded a slightly more stable system, but the errors started coming back. I think I formatted the drive and installed the OS  too many times, I was clicking and editing things while doing other things without thinking about it. The system would last a little longer with each tweak, then it would just get worse. It’s really strange, my Amiga 2000 with a GVP Accelerator installed without a problem, ever!. For some reason, I thought the A3000D was going to be open shut case once the repairs were done. This was not the case.

I had a batch of 514402AZ-60 ZIP modules, which are supposed to be static column RAM, but are not. I thought maybe a homogeneous block of chips might help the stability, also I had 16MB’s of it. A 10% fast ram speed loss for system stability I can live with.

I was reading through other people’s issues when an article about problems with Ramsey/Super DMAC revisions. The chips are paired, according to many. Others state that sometimes the mixed bag works. I pulled my Ramsey and returned the original Ramsey. Well +1 to the Paired Chips theory, the system is rock solid.