After a getting my TC64 back, everything was working great. The new firmware came out and I used the update.prg on small SD-Card to update the firmware. Post update, the cart isn’t responding properly. Even after multiple updates via Chaco on multiple computers.

I copied these files, over to an SD card. 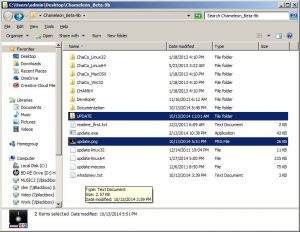 I noticed some garbage on boot, so I held down the space bar — this is what I saw. Notice the garbled letters on the left hand side and the 0’s showing up in the bottom area.

If left un-attended it ends looking like below. The text at the bottom is garbled and it just freezes here. 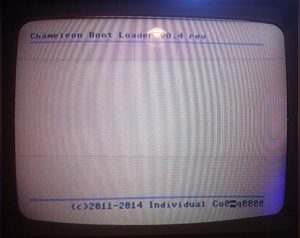 I didn’t record images of the actual update process, but it reported everything was good and to press a key to reboot the cart. Which I did.

I connected the cart to a PC, opened CHACO and the cart was available. Closed CHACO and I ran the update.exe from the PC. It updated without problem, reporting no errors and the device rebooted to a core (0?). But when hooked up to a 64 or to VGA with/without a docking station same images as above.

I downloaded another package, in case there was a problem with the files (maybe they got corrupted etc). The same process from the PC. Of course I can’t update from C64 mode as it doesn’t get past the boot loader.