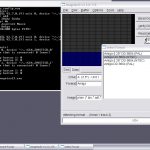 I’ve managed connect my PCI Catweasel card to pass-though on my ESXi server. I took a bit of work and it’s not perfect (ie no Joysticks or Mice work) but the disk subsystem works great. I added to my server a Multi-Function 3 1/2 drive with USB reader, which I thought was a stretch to get working — but in the end, it was fine. I also added a TEAC 5 1/4 drive which reads and writes perfectly. The Disk Imaging tools work reasonably well but get stuck sometimes.

I tested some Amiga, Apple and C64 floppies and was surprised how fast they imaged or transferred down.

Stability was an issue initially, but after making some adjustments to processor and memory layout of the VM, XP and the Catweasel card are working great. The other subsystems on the card are not used, but what I really wanted was a multi-format disk reader and writer.

Click on the thumbnail to see the desktop in action.