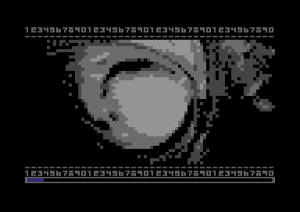 This segment is from the opening of Doctor Who, (I think Tom Baker :)) and slightly tweaked to allow it to loop better. The output of GIF2C64, is generally just RAW data or a text file with a long stream of .byte(s). I’ve added some ASM output options like a mini player for animated gif’s (in this example) and scrolling code for images larger than the screen of the C64. There were a few video’s out there, in the 80’s that someone made — one of them was of HE-MAN. It was black and white pixels represented by the standard font map. Seeing that video made me a little crazy for video on the C64, even much later I was working in DPaint on the Amiga with ambitions to get the anims over to the C64. I can also remember the first digitized audio I ever heard on the C64, I think it was “stay a while, stay forever!”.. the next was “Born in the USA” by Bruce Springsteen.